Everyone has a Christmas against which all other Christmases are measured.

The nostalgic one that comes to mind as December rolls along. Special people no longer here, step back in stride beside us. Whispers of forgotten moments in our ears.

Memories and emotions as strong as they ever were... 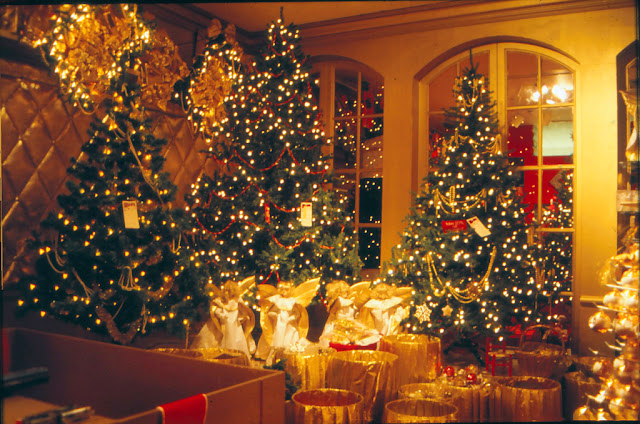 We hadn't planned to be there at all. However, a chain of events
conspired to make it so. Five months into our working holiday/
honeymoon in the UK, I had a gut feeling all was not well back in
NZ and rang my Dad collect (remember those days), who assured
me everything was fine. A couple of weeks later, he phoned to reveal
the doctors had told him he would not see Christmas.

We were homeward bound within 24 hours. I remember vividly
the numb sense of shock and disbelief as my workmate Dean drove us
down from Chester to London. The combie van we had just bought,
and all plans to head to Europe, now worthless and insignificant
in our foggy minds. While on the train to Gatwick, flashes of colour
filled the sky, incongruous with our mood. It was Guy Fawkes night.


An epic journey ensued. While transiting through Newark and
LA we were escorted off the plane, our passports taken from us by
a minder who watched over us and 12 or so other hapless
travellers who had failed to secure their transit visas.

Before departing Tahiti, we found ourselves sitting on a plane with
broken air conditioning for over an hour, in our British winter clothing.
Finally landing in New Zealand 37 hours later to the voice of the captain
politely asking if we could remain seated for a little while longer,
as unfortunately, no one had arrived yet to open up the airport!

The following six weeks I will treasure forever. Unimportant stuff
no longer important at all, words spoken, hugs given, time spent,
promises made, tears falling and the hardest goodbye I have ever
had to make. True to a promise made, we found ourselves once again
on a plane, heading back to the UK via Honolulu and New York,
with visas this time.


As we began our descent to Newark Airport, the pilot banked steeply,
and there before our eyes were the dazzling lights and unmistakable
view of Manhattan. The Empire State building resplendent in Christmas
red and green. Central Park a perfect inky black rectangle amidst the
twinkling skyscrapers all jostling for attention. I smiled despite myself;
were we really here?

We shared a yellow cab with a couple we had met on the plane and as
we emerged from a long tunnel the strangest thing happened.
Everything around us was utterly familiar and new and exciting
at the same time. The neon billboards of Times Square, steam rising
from the sidewalk manhole covers, the buildings, the people and
yellow cabs everywhere. 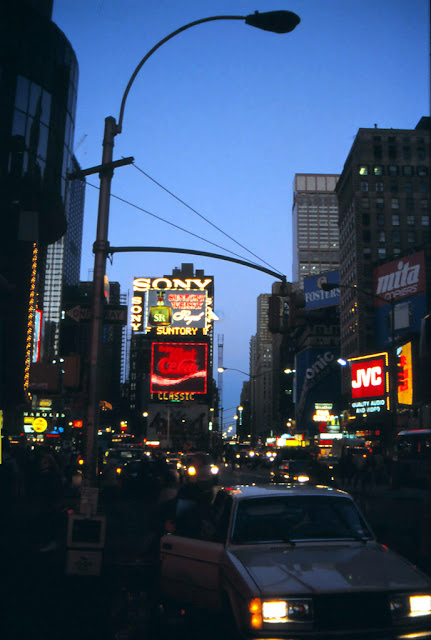 Next morning we set out from our hotel on Madison Avenue,
to explore on foot. It was freezing. Colder than we had ever
felt in England. Both of us had layered on all our clothes in
Heidi-like fashion before venturing out.

By far the biggest surprise was the vibrancy and life at street
level. We had wondered if the tall skyscrapers would leave
only dark shafts of space below them, the atmosphere
bleak and menacing, like Batman's Gotham City. However,
despite the biting cold, everything around us was bright and
colourful, bursting with life and personality; undiminished by
the huge scale of the buildings either side.

The unexpected familiarity, from the day before, only
intensified as we discovered more of the city. Hot Dog stands,
Diners, Jewish bakeries selling bagels, Italian delicatessens,
swanky designer stores with canvas entrance canopies
where doormen greeted guests arriving in stretch limos and
of course the ever-present yellow cabs.

Gradually the realisation dawned on us: we had been here
before, experienced all these things before, one hundred
times over, in films and TV shows. All this, with the amazing
overlay of Christmas extravagance. Everything here, not just
the soaring skyscrapers, was truly larger than life. I wish now
I had captured so much more of what we saw. But these were
pre-digital times; we took slides back then and, being frugal
backpackers, only a few at that. 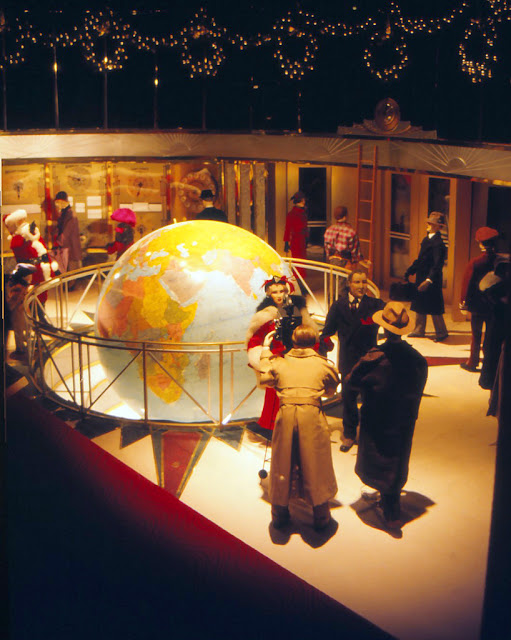 As we strolled along 5th Avenue, there were Father Christmases driving
horse-drawn carriages, oblivious to the continuous stream of traffic and
gently falling rain. People everywhere, in stylish winter coats, hats and
gloves, doing the last of their Christmas shopping. Busy, but not chaotic.
The regimented street grid system somehow giving a pervading
sense of order.

I loved how Broadway totally ignores this rule, flowing rebelliously
across the city grid like liquid gold. Times Square in the rain was magic.
The colours doubled in their puddle reflections. We treated ourselves
to a giant plate of ribs near there, at a recommended restaurant
famed for its offhand New Yorker service as well as its ribs. We actually
found the waiters to be really nice and the ribs delicious.

Next was Macy's the famous department store. Inside was warm,
welcoming and absolutely mind-boggling to two Kiwis who had not
experienced Christmas shopping on this scale before. We had never
seen so many Christmas decorations for sale in one place. The displays
and variety on offer were incredible. The whole top floor was a Magical
Christmas Santaland. Unashamedly we fell into step with the many
children and their families wandering through, marvelling at the detail,
design and workmanship. It was beautiful. Tchaikovsky's
The Nutcracker was playing; one of my Dad's favourite composers.
I cried most of the way around, thankful that it was dark, but also glad
he felt closer somehow.


Outside again, and dark now, we wandered along the streets
checking out all the Christmas trees and fabulous displays in each shop
window and building lobby. 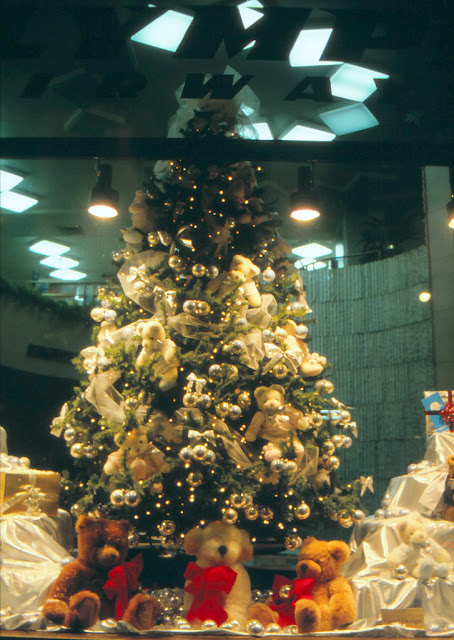 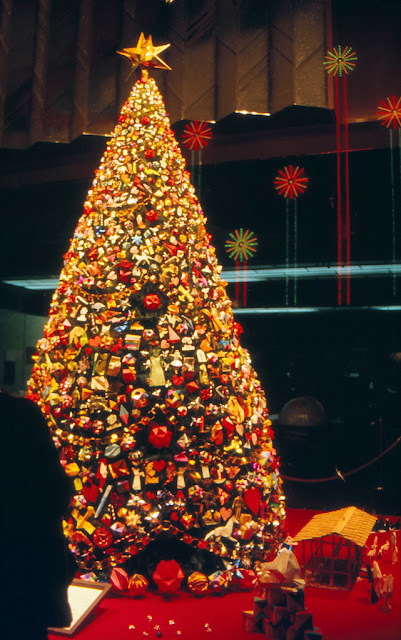 Our favourite on 5th Avenue, was the beautiful promenade of golden
angels blowing their trumpets, leading to the impossibly tall and narrow
Rockefeller Centre. Frozen forecourt beneath, full of twirling ice
skaters. The lower storeys adorned with a giant Christmas tree; its
lights bright and colourful against the blue-grey façade soaring up
into the misty wet sky. A little further along, we heard a choir singing
and followed the sound up into a beautiful Gothic cathedral lit with
hundreds of candles. Watching quietly as people lit candles
and carefully placed them in tiny holders, we then did the
same. My Dad right beside me. It was Christmas Eve. 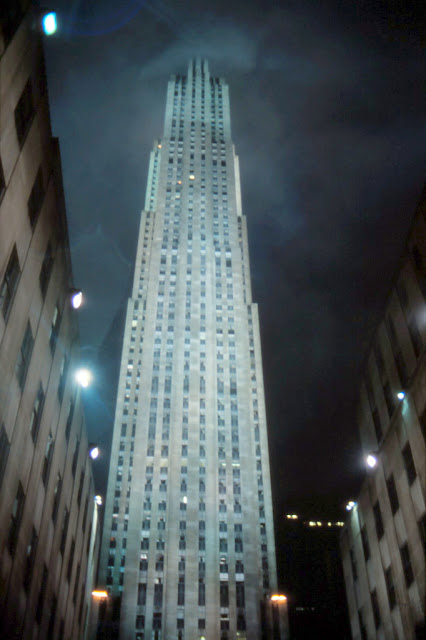 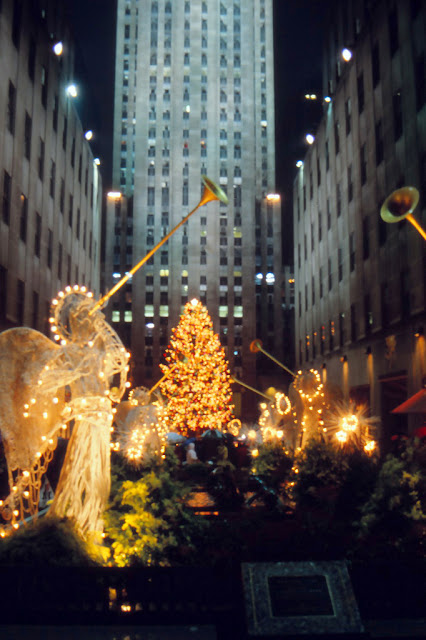 On Boxing Day we made our way to the Empire State
Building. The queue to go up was understandably long. We
didn't mind, it was great to have time to take in all the Art
Deco detailing in the grand lobby. The view from the top was
brilliant, a 360deg miniaturised panorama of Manhattan and
beyond. Most of the other highrises dwarfed from this great
height. The only rivals back then were my favourite: the
Chrysler Building, and the Twin Towers - that day
peacefully silhouetted in the morning sun.

Back at ground level, a spontaneous lunch invitation, from
two people we had chatted with in the queue, took us to an
awesome apartment in the Lower East Side. He had recently
moved there and his mum was visiting from their hometown
in North Carolina. At the time, this area of New York was
just beginning to be popular again and was a wonderfully
eclectic mix of shabby and chic.

The apartment was on the 2nd floor of a converted
warehouse, the layout an open plan u-shape of dining, living,
and sleeping, wrapped around a central core of kitchen and
bathroom. High exposed brick walls and almost full height
windows wrapped around two sides, gave it an expansive airy
feel; I loved it. From here we sat and watched all the comings
and goings at street level below. We even saw a guy selling
watches displayed on the inside of his coat. 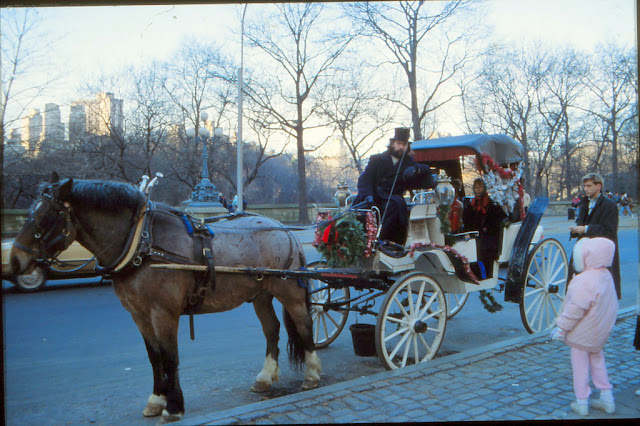 Afterwards, the four of us took the subway to Central Park,
for a horse-drawn carriage ride - their shout. Over the years
the kindness and generosity of strangers have always amazed
us. The people we have met on our travels are always the best
memories of all!

One of the greatest things my Dad taught me in life, was to
pause...take time to stop and listen to music, to really see
and hear the world around you, and to make the most of the
time you have with the people you love.


© All photos have been taken by, and remain the property of Krystene and Rod Vickers